skip to main | skip to sidebar

Clean and Simple and NEW Stencil!

The Dreamweaver January monthly challenge, in honor of all those resolutions we hope to achieve, is "Losing the Weight...AKA Clean and Simple (CAS)". If we all try really hard to simplify our design-work without losing our creativity, we can all say at the end of the month that we've lost some weight! Maybe not off of our waistlines, but at least off of our cards! Gotta start somewhere!
Of course, CHA, the Craft and Hobby Association Convention was this past week.  I don't know about my fellow design team members, but I would definitely fall off the resolution wagon at that fun event!  For the purposes of my blog, though, I am going to continue my best efforts to be Clean and Simple.  I am also presenting one of the NEW RELEASES for Dreamweaver, and I couldn't be more excited about this beautiful heart stencil. 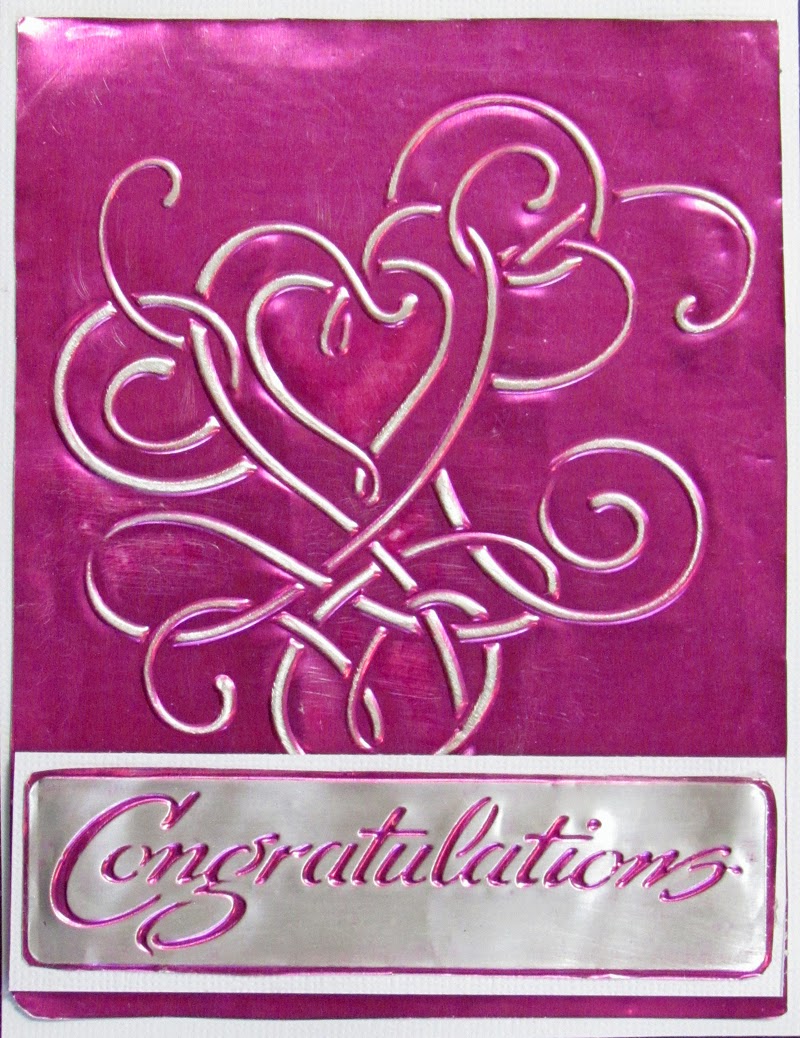 Yep, super simple and very clean.  I used two stencils:  the new and gorgeous LJ928 Swirly Hearts and the classic LS22 Congratulations.  The other materials that I needed were Fuschia Coated Mercart Aluminum, the Stamping Details Rubber Embossing Mat, a manual die cut machine (I used a Cuttlebug), Mercart Teflon Tool (optional, but from the Beginner Kit), sandpaper, scissors, adhesive and card stock.  How quick was it?  Well, it took me longer to write this post!  First, I ran both stencils through the die cut machine with metal and the embossing mat.  I just switched up the order.  For the heart, I put the stencil face down with the metal pink side down over it, followed by the rubber mat and the usual cutting mats.  The congratulations stencil was placed face up with the metal pink side up on top of it.  I made the word a little "crisper" by pushing the metal down against the stencil with the Teflon Tool.  I sanded it with the stencil still in place.  The stencil was removed from the metal before I sanded the heart.  Then, I simply assembled the card.  Done.  Seriously!
I would appreciate a comment if you get a chance.  Also, be sure and visit the blogs of my fellow team members, as everyone should be posting some new stencils this week (and you don't want to miss out on seeing those!)


Dream It Up!
Laura Drahozal Lyn Bernatovich Pam Hornschu Heidi Erickson Louise Healy  Cyndi Bundy
Thanks for stopping by!  Have a great day. 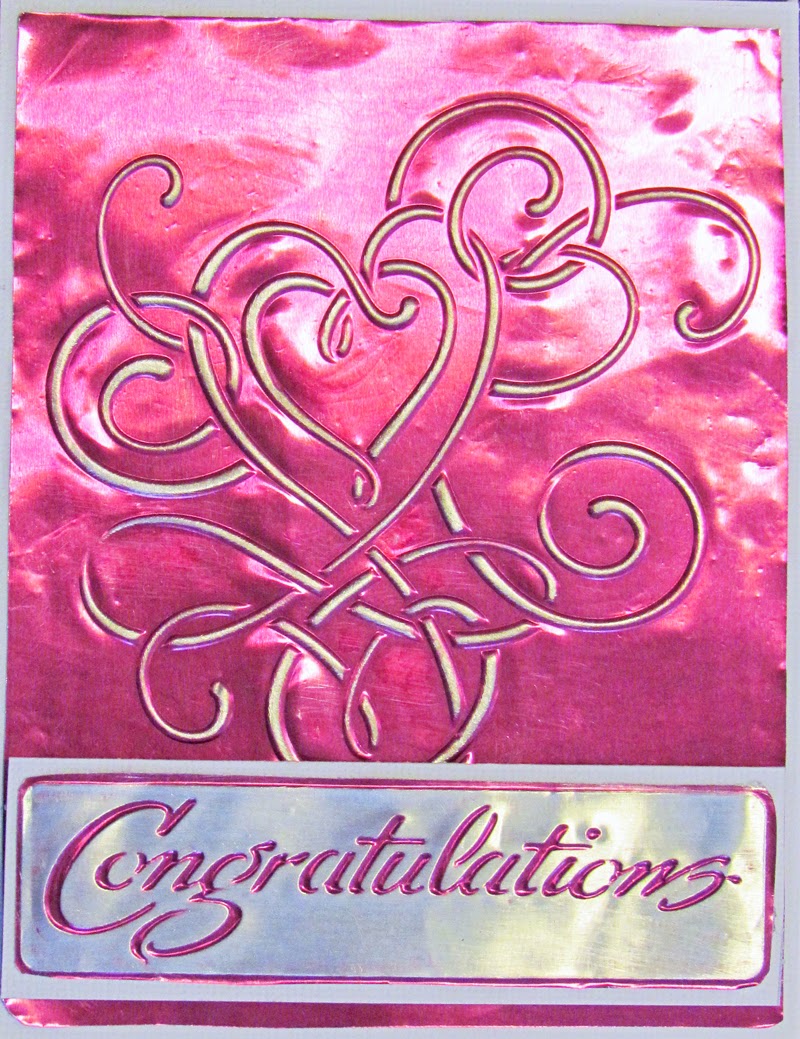 Posted by Laura Drahozal at 1:00 AM 8 comments:

Last week, my friend Candy suggested that I enter the Mosaic Moments January Challenge.  It was to make a mosaic project based on "The Snow Queen", by Hans Christen Anderson.  Honestly, I was at a real lack for ideas at first.  Then, as I looked through some old Disney photos, I discovered the pictures I took on the Journey Into Narnia attraction at Disney Hollywood Studios.  It was a walk through display of the various sets and props used in "The Lion, the Witch and the Wardrobe" movie.  The attraction also included a small performance by an actress portraying the White Witch.  If anyone was impacted by ice in her heart, it was this character--and so my page idea was born! 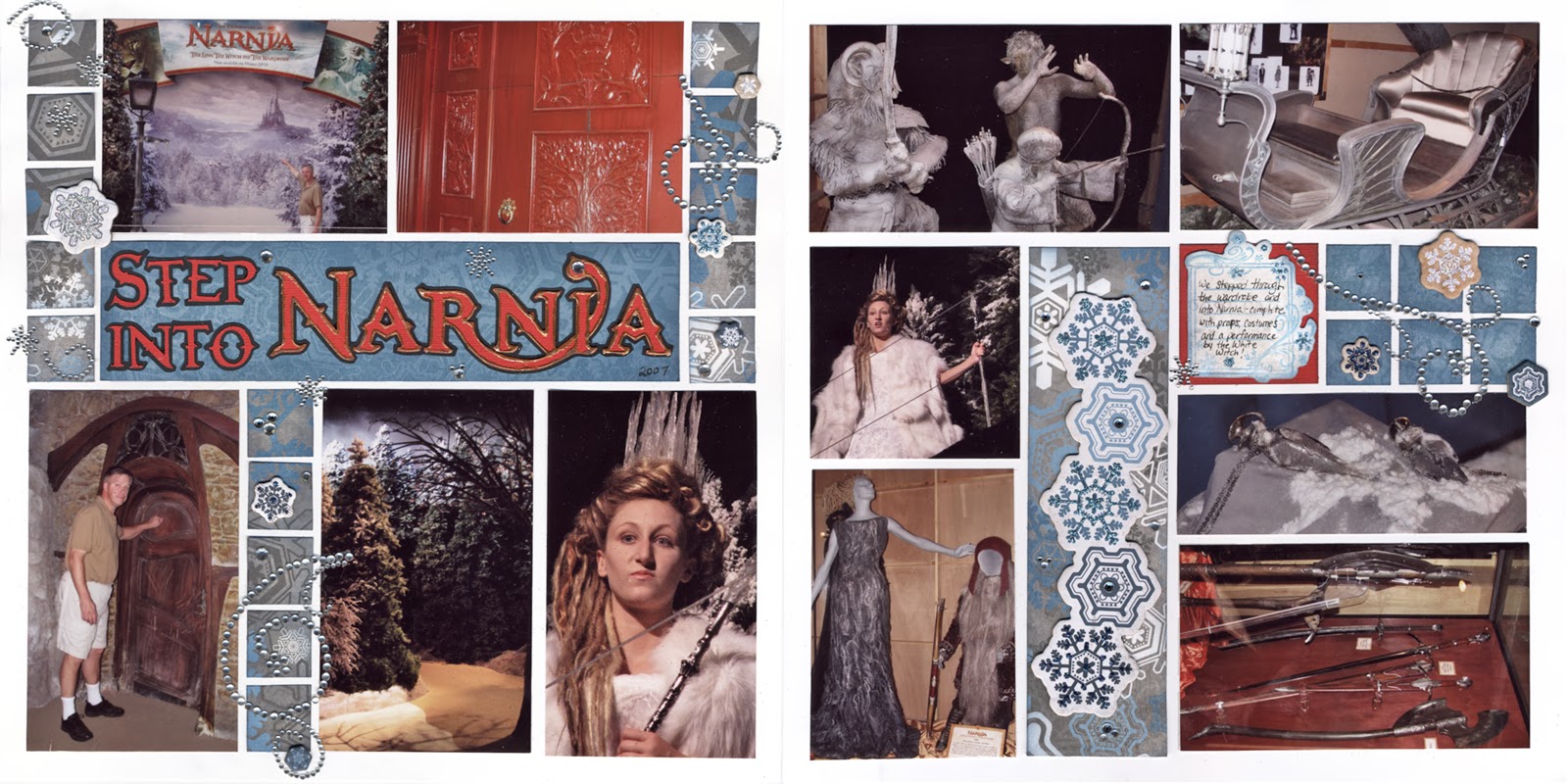 As I was assembling the page, I discovered a very interesting challenge site called 1, 2, 3 Get Scrappy!  They base their challenges on a tic tac toe board.  You chose which three items in a row you want to include in the challenge.  Pretty cool, huh?  Here is this month's challenge, #6.

So, in total, here is what I used: 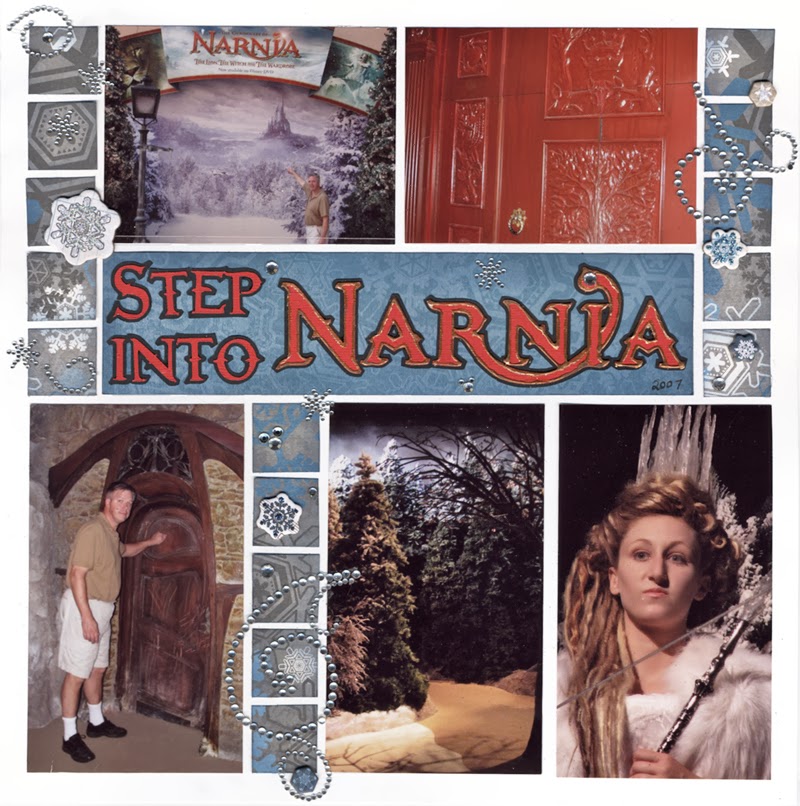 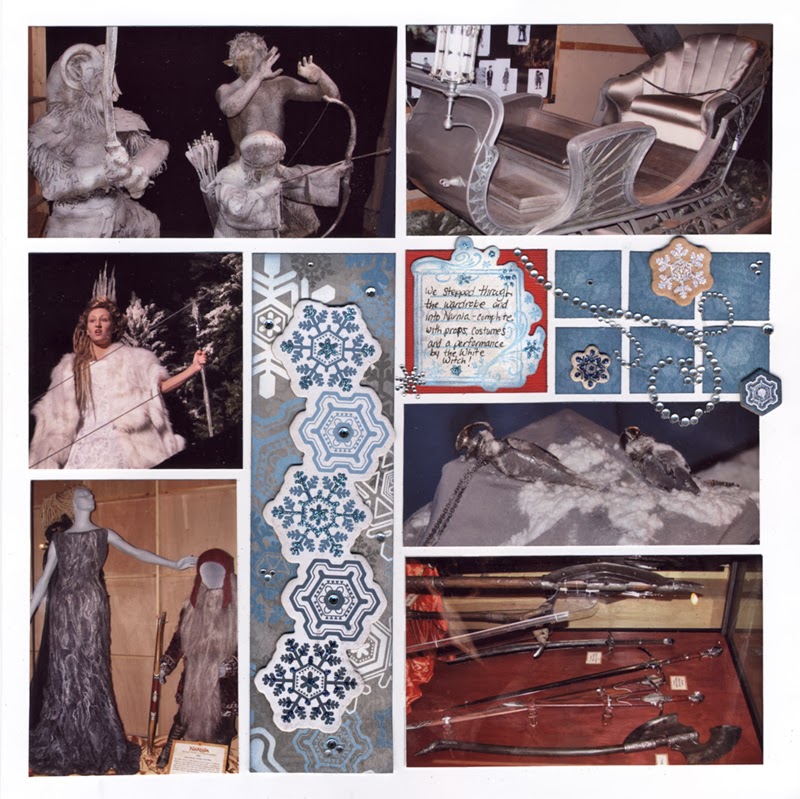 Check out the 1, 2, 3 Get Scrappy Challenge HERE.  I used the row that reads Snowflakes, Color Blue and Lots of Bling. 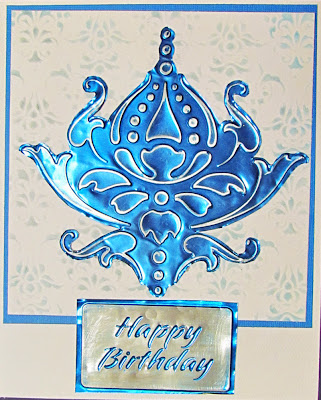 Did you know that we're celebrating the Queen's birthday this week? Well...the Queen of Stencils, Lynell Harlow, that is. Actually, her birthday is on Saturday, but we're surprising her by posting birthday cards in her honor today. Nothing like making you feel OLD sooner than necessary, right Lynell? You'll even see a few familiar names in our lineup, as some of the teaching team are whooping it up for her as well.
In addition to our birthday party, we are also beginning a new year and a new monthly challenge. In honor of all those resolutions we hope to achieve, our challenge is "Losing the Weight...AKA Clean and Simple (CAS)". If we all try really hard to simplify our design-work without losing our creativity, we can all say at the end of the month that we've lost some weight! Maybe not off of our waistlines, but at least off of our cards! Gotta start somewhere!

Although Clean and Simple is not my regular style, I am posting something easy.  All I did was run Medium Blue Coated Mercart Aluminum through my Cuttlebug with the Stamping Details Embossing Mat and two different stencils.  With stencil Vintage Decor LX7022, I placed the stencil face down and the metal blue side down.  With the Small Happy Birthday stencil LS1010, I place the stencil face up with the blue side up.  The embossing mat is on top of the metal in both cases.  When I removed the stencil from the machine, I pushed the metal in around the edges with my Mercart Telfon Tool.  Then, I sanded the Happy Birthday while the metal remained on the stencil.  I removed the vintage decor stencil and then sanded it.
The background is Damask LX7001 run through the machine with white card stock and then lightly colored with the Splendor Inkpad and a Gold Handled Stencil Brush.  After that, it was simple assembly.

I hope you enjoyed Lynell's card.  Now, go check out the other birthday card posts this week, and, if you see her, don't forget to wish Lynell a great birthday! 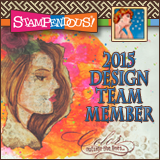 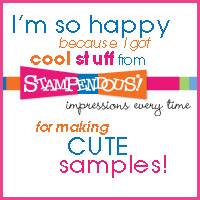 Yes, I get stuff to make cards

Laura Drahozal
I live with my husband and my very spoiled collie in Michigan. I enjoy scrapbooking because I feel like it is both a way to preserve memories and create art. I love being on the Dreamweaver Design Team because I can explore techniques using these exquisite stencils and work with a group of wonderful teammates. I previously enjoyed working on the sparkling teams of both Art Glitter and Connie Crystals. I have also served on the Globecraft Memories Design Team, and completely addicted to their 3D Enamel Gels. I appeared in the Dec/Jan 2011 edition of The Stampers Sampler, The 2011 Catch Up Issue. and the April 2011 Stamp & Scrap Arts.